The latest Offender Management Statistics (published Thursday 29 October 2020 and covering the second quarter of this year) show the full impact of coronavirus and the lockdown on the number of people in prison and supervised by the probation service. This blog post, written by sector expert Russell Webster, summarises some of the key trends.

The prison population on 30 September this year was 5% lower than at the same point last year. The total number of people inside has dropped further over the last month and was 78,977 on Friday 29 October. There was a huge drop in the number of first receptions to prison during April and June this year; the figure of 12,608 was a 31% fall compared to the same quarter last year – with the reduction attributed to the disruption to the courts throughout lockdown.

While this drop was expected, I was surprised to see a smaller, but still very substantial reduction in the number of people released from prison sentences between April and June. This figure was 13,290, a full 15% down on the same period in 2019.

This overall fall was driven by a large decrease in the number of releases from sentences of ‘less than 12 months’ (of which there were 6,115 in the latest quarter) – which was 26% lower than the same period in 2019. However, this was somewhat offset by a small (2%) increase in releases from determinate sentences of ‘4 years or more’.

This reflects the general trend in the prison population away from short sentenced offenders, to those serving longer determinate sentences.

There was also a large (35%) fall in the number of indeterminate sentenced prisoners released between April and June 2020 compared to the previous year; with a 45% fall in number of IPP releases and a 24% drop in the number of prison releases from Life sentences. This likely reflects the effect of COVID-19 disruption on the normal Parole Board hearing process – which included a decision to suspend all in-person oral hearings.

Despite lockdown, the remand population continued to increase across this quarter of 2020, continuing the trend set across 2019 and the previous quarters of 2020. It rose to 12,274, its highest value since 2014.
The remand population was 28% higher than at the same point 12 months earlier. The number of males and females in custody on remand rose by 29% (to 11,660) and 8% (to 614) respectively.

There has been substantial disruption to ROTL due to COVID-19 restrictions. At the end of March 2020, it was announced that all ROTL had been suspended – except in cases of prisoners working as ‘key workers’ or temporary release on compassionate grounds.

As a result of these operational changes, there were only 12,643 incidences of ROTL during the quarter ending June 2020, an 88% decrease compared to the same quarter in 2019. More than 80% of the ROTL incidences in the latest quarter were for ‘Work Related’ reasons. 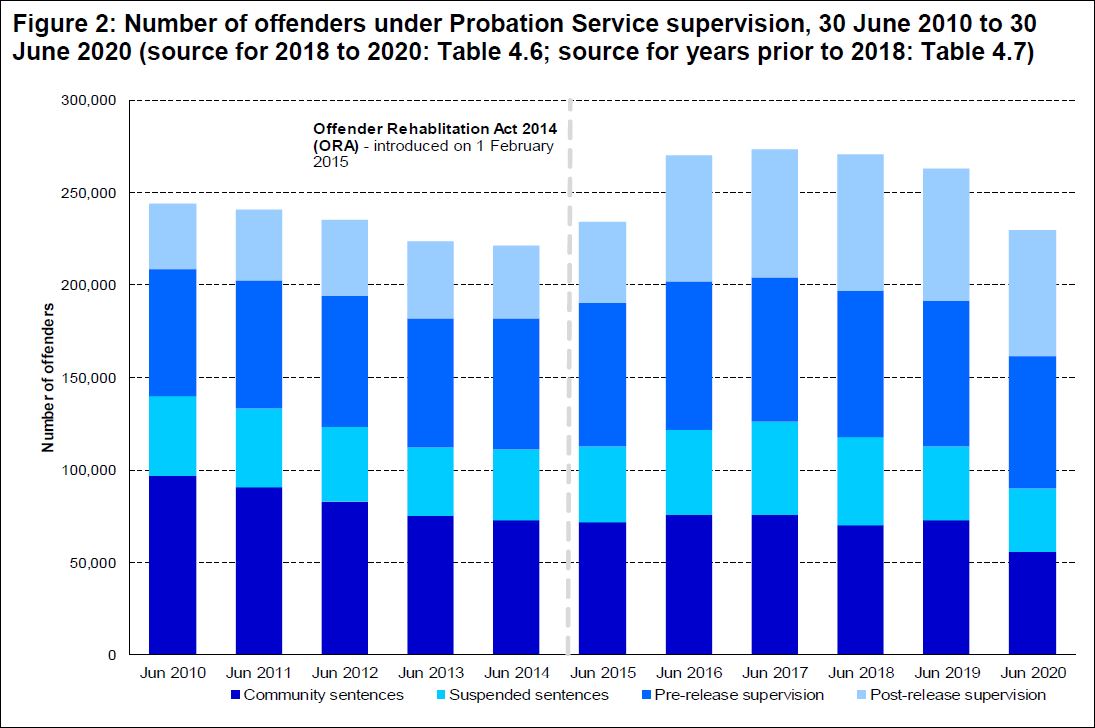 As you can see from the graphic above, the number of people subject to supervision by the probation service continues to fall. As at 30 June 2020, there were 224,587 offenders supervised by the Probation Service, representing a 12% decrease compared to the 30 June 2019. Over the same period, court order caseload decreased by 20% from 111,197 to 88,639, with the number of offenders on a community order (CO) decreasing by 24%, whilst those on a suspended sentence order (SSO) with requirements decreased by 15%. The total caseload of offenders supervised before or after release from prison at the end of June 2020 was 139,590, representing a decrease of 6% since the end of June 2019.

The scale of the differences between the latest caseload figures and those from the same period a year ago can, again, be mainly attributed to reduced court activity following the response to the COVID-19 pandemic; both the Magistrates’ Court and Crown Court saw sharp decreases in their workload in the period April-June 2020 and consequently, this has had an impact on the number of offenders on the probation caseload.

There were also a huge drop – of 76% – in the number of pre-sentence reports prepared by the probation service in the second quarter of this year, compared to the same period last year. Again, this was attributed to the much reduced court activity during lockdown as well as the National Probation Service coping with fewer staff owing to people shielding or self-isolating.

It will be interesting to see whether these falling trends were reversed during the third quarter of the year in the next offender management statistics bulletin.

This article was written by Russell Webster, and originally featured on his website here.

Ensuring the Safety of Older Prisoners through a Pandemic