At IG Schools, we have no doubt there was a monumental sigh of relief from thousands of teachers across the UK as the school year finally drew to a close last week.

After a year where school leaders and teachers have admirably persevered through countless restrictions and lockdowns, they certainly deserve a period of downtime and reflection.

A disruptive end of year for teachers and pupils alike

The disruption spanned throughout the entire school year – from the first week in September through to the very last. For example, almost 1.5m primary and secondary school pupils were absent from classes on the week commencing Monday 5th July. Figures from the Department for Education (DfE) revealed that approximately 840,000 were off for Covid-related reasons and an additional 630,000 were absent for other causes. This would have included mental health problems, according to Kevin Courtney, joint general secretary of the National Education Union, who was speaking in front of the Commons Education Select Committee.

Also addressing the committee was Nick Brook, deputy general secretary of the National Association of Head Teachers (NAHT), who claimed that attendance figures made “grim reading”. He added: "The government's wider narrative around relaxation of safety measures appears to be at complete odds with the reality in schools right now… The government must take urgent action to drive down case numbers amongst school-aged children and implement alternative safety measures in key areas such as ventilation.”

Missing the chance to say goodbye

The final few days of term for those leaving primary and secondary school are traditionally meant to be a celebration of the several years classmates have spent together. Unfortunately, this year, the restrictions led to thousands of pupils across the country missing the chance to say goodbye. In addition, the National Education Union claimed that some parents are now choosing to keep youngsters off to avoid having to isolate at the beginning of the school holidays - particularly if they've booked a trip away.

However, there is also a growing number of parents that have taken this a step further, after the BBC revealed that number of children registering for home education in the UK rose by 75% in the first eight months of the current school year. Parents and councils have been citing “Covid anxiety” as the key factor behind this rise, according to the article, whilst the DfE says it supports home educating and revealed plans to launch a registration system.

“More than 40,000 pupils were formally taken out of school in the UK between September 2020 and April 2021, compared with an average of 23,000 over the previous two years,” says the BBC. According to the study, there was a 92% growth in the number of registrations in the north-west.

As part of its research, the BBC spoke to several parents to discuss their decision-making process. Novena-Chanel explained she took her son Imari out of school because she felt he was “starting to regress”. Edward’s mum Victoria removed her son due to health concerns, whilst Naomi said her daughter Bella was struggling at school but thrived at home, so took the decision to home-school once the schools reopened.

Commenting on the research, Paul Whiteman, General Secretary of NAHT, said “a combination of rising case numbers in schools, and the government's decision to relax a number of the safety measures could mean that we see this trend continue”. In response, the DfE explained “is absolutely vital that any decision to home-educate is made with the child's best interests at the forefront of parents' minds”.

A return to normality?

With just over a month to go until the new school year begins, it is hard to predict the level of disruption teachers will face for a third successive year – despite school bubbles being scrapped. Moving forward, only those pupils testing positive will have to self-isolate, whilst schools will no longer need to stagger start and finish times, in a move designed to ensure more pupils can return to school with a greater sense of normality.

Speaking in the House of Commons earlier this month, Education Secretary Gavin Williamson added that secondary and college pupils must take two on-site tests at the start of term, followed by two tests a week at home until the end of September, when the policy will be reviewed. In addition, fully vaccinated teaching staff can remain on-site even if a close contact tests positive.

The IG Schools team will be keeping its subscribers abreast of the latest news and developments as the new school year gets underway. To stay up to date, you can join our mailing list here, and view our latest events and training courses here. 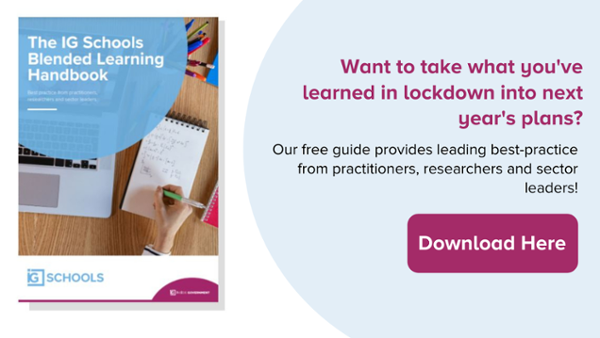 Is there a correlation between teaching computing and potential of blended learning?

English Hubs and the Importance of Reading Skills

A New Era of Learning in a Post-Pandemic World