The Cost of COVID-19 and Future Funding Plans for Schools

Stephen Morales, CEO, ISBL, shares his reflections on the national funding formula, and the financial implications of COVID-19.

Just before the country went into lockdown, we were poised for the introduction of a new national funding formula and the possible end of funding inequity across the country by removing a local authority’s ability to shift funding delegated by central government according to Schools Forum priorities. This rebalancing would have (at least for some schools) perhaps mitigated against some of the new funding pressures faced by schools, including an increase in teacher pension contributions, support staff salary increases and the government’s commitment to paying NQTs £30,000.

The DfE had planned to launch a consultation with the sector before implementing the national funding formula ready for the new academic year – clearly, the COVID-19 pandemic meant all non-urgent government activity was placed on hold.

The true cost of the pandemic – from both an educational and a financial perspective – is only now starting to become clearer.

The constant deluge of ever-changing guidance over the last eight months has been unrelenting, and the effort to digest, interpret and then implement the measures has been quite overwhelming.

We started by repurposing schools as community support hubs looking after the children of key workers and vulnerable children. We then introduced a number of year groups: Reception, Year 1, Year 6 and then later Years 11 and 12. Introducing each of these groups required measures and changes resulting in modification to school sites. Schools also had to ensure that pupils from more deprived backgrounds were still able to enjoy a nutritious school lunch. The DfE engaged the services of Edenred, a France-based rewards and vouchers company. A new scheme was thrust upon schools with little notice and no consultation. The resulting fiasco was almost inevitable and caused schools additional work and, in some cases, additional costs as the initial failure of the system led schools to seek alternative methods to feed their children.

During this period, the government announced an exceptional costs grant claimable for three broad areas of activity related to COVID measures. Activity included premises costs, cleaning costs and free school meals. These costs would only be recoverable if the activity was new and directly related to the pandemic; furthermore, only schools forecasting an in-year deficit would be eligible and then only on submission of a detailed list of expenses incurred. The grant was not to be paid up front and would cover the period between March and August 2020.

Towards the end of the summer, the PM announced that all schools would fully reopen from September and that detailed guidance would be issued in due course.

That guidance eventually arrived with school leaders on the last day of August. Despite the short notice, schools mobilised their teams and remarkably were ready to welcome pupils back on 4 September.

But this has all come at a cost to schools, both financially and emotionally. Consulting with health and safety experts, undertaking forensic risk assessments and implementing the necessary changes to the school estate has been expensive. Education leaders have been working non-stop for over six months, and even if some were able to enjoy a brief break during the summer, this has by no means compensated for the many extra hours they have been working.

Our education sector is being pushed to the limit. We now need to think very carefully about adding any unnecessary stress to a workforce already at or perhaps beyond full capacity.

Accountability measures, including the return of Ofsted inspections, the reintroduction of exams and testing, and unreasonable levels of financial scrutiny need to be reassessed. An unrealistic race to return our education system back to where it was in March could be counter-intuitive.

Perhaps rather than recovery and a return to the old world, a measured transition to a new way of delivering education might give us all the space and time we need to reflect, reassess and recharge.

For further insights and advice on issues of funding and finance from sector leaders, download the free IG Schools Handbook now. 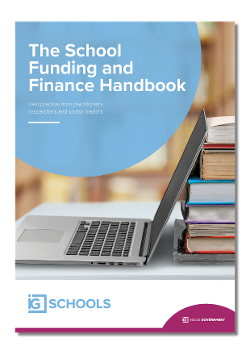 The Cost of the School Day in England

How Can We Make the Most of Classroom Space?